Home
Products
About Us
Factory Tour
Quality Control
Contact Us

Have been business relationship for 3 years, great partner for Nickel Cobalt Alloy!

On-time delivery. And support is good and fast.

Terfenol-D, an alloy of the formula TbxDy1−xFe2 (x ~ 0.3), is a magnetostrictive material. It was initially developed in the 1970s by the Naval Ordnance Laboratory in United States. The technology for manufacturing the material efficiently was developed in the 1980s at Ames Laboratory under a U.S. Navy funded program. It is named after terbium, iron (Fe), Naval Ordnance Laboratory (NOL), and the D comes from dysprosium.

The alloy has the highest magnetostriction of any alloy, up to 0.002 m/m at saturation; it expands and contracts in a magnetic field. Its initial application was in naval sonar systems. It sees application in magnetomechanical sensors, actuators, and acoustic and ultrasonic transducers, e.g. in the SoundBug device (its first commercial application by FeONIC).

Magnetostrictive actuators have also been considered for use in fuel injectors for diesel engines because of the high stresses that can be produced. 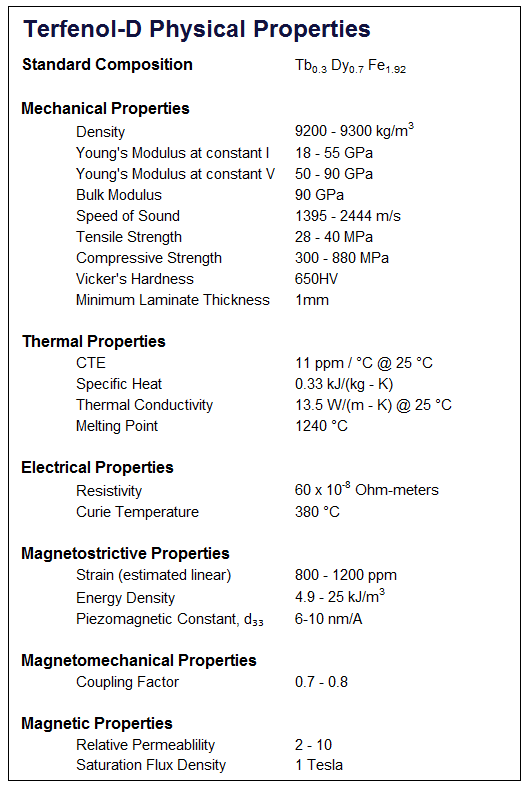 Delivery: 6 weeks
Powder is shipped in sealed containers under argon gas
Powder is sold by size in microns, by the gram